Everything you need to know about phimosis (and paraphimosis)

Just thinking about it makes most of us wince, but it's a serious condition that can cause other issues down the line.

Written by
Medically reviewed by
Last updated
May 24, 2022

Sausage collar; turtleneck; Devil’s umbrella ... These are just some of the better names used to make light of the soft muscle tissue that comprises the foreskin.

It’s estimated that just 20 per cent of newborns are being circumcised, meaning we should really be paying more attention to this humorously-nicknamed sheath of skin, and probably be taking its health and wellbeing more seriously.

That’s why we’re looking into two of the more severe foreskin-related problems experienced by uncircumcised men.

If you are circumcised, then you don’t need to concern yourself with either, although there are still plenty of other penis problems worth knowing about—foreskin or not.

To put it simply, Phimosis is the condition where the top of the foreskin becomes too tight or too painful to pull back from the head of the penis.

It’s universally common in babies and toddlers and will usually correct itself within the first few years.

A study published in the journal of Paediatric Urology determined that it affects 3.4 per cent of men over the age of 18.

When an adult experiences Phimosis, it presents as a symptom of an infection, an STI or an injury.

Phimosis can lead to swelling and urinary tract infections if left untreated. The increased pressure on the head of the penis can also make it difficult to empty your bladder. This is what’s called urinary retention.

Dr. Matt Vickers, a GP based in Sydney, warns that Phimosis can also cause painful erections and seriously affect your sex life.

“Phimosis is likely made worse by intercourse or foreplay due to the friction,” he says. “This can result in significant pain and embarrassment.”

But that’s not the worst of it.

“Due to the pain and psychological factors, Phimosis will often lead to erectile dysfunction.”

ED—the issue that’s estimated to affect around one million Aussie men can also be caused by Phimosis.

It’s also common for GPs to deny men access to erectile dysfunction medication if it’s experienced as a direct result of Phimosis.

Dr. Vickers says: “It’s unlikely men with ED will benefit from any medication until the Phimosis and its cause are treated.”

“ED medications can lead to stronger erections resulting in quite intense pain or even Paraphimosis.”

So what causes Phimosis and how is it treated?

Balanitis is one of the more common causes. It’s a condition where excessive yeast under the foreskin leads to inflammation and a tighter-than-usual foreskin.

Balanitis usually occurs as a result of poor hygiene. In fact, poor penis hygiene is a factor in a range of related issues, even penile cancer.

Phimosis is also a symptom of certain STIs including syphilis, gonorrhoea and the common threat that is genital herpes.

Alternatively, a tear to the foreskin can lead to scar tissue forming, which prevents the skin from pulling back.

It’s unlikely that Phimosis can be corrected without addressing its underlying cause.

Managing the Balanitis or STI can correct the issue, or a GP may prescribe a steroid cream to help stretch the foreskin.

“The steroid cream will help reduce inflammation, but it’s also used to soften the foreskin and allow it to stretch over time,” says Dr. Vickers.

Steroid creams have a success rate of over 85 per cent. It’s a good thing too, because if the creams don’t work, surgery to remove part of the foreskin or a circumcision may be the only option.

Dr. Vickers says that this is something no man wants to experience.

“Adult circumcisions are not a simple procedure and have a much higher complication rate than when performed on infants,” he says.

Paraphimosis is the polar opposite of Phimosis. It’s caused when a penis injury stops the foreskin from moving back up towards the tip.

This one’s a serious medical condition and should be treated ASAP, or it can cause long-term damage.

“It’s not something that can wait until the next day if your penis is tender or swollen as a result,” says Dr. Vickers.

Paraphimosis is incredibly rare. A paper published by NCBI suggests that around one per cent of males experience this condition.

What causes Paraphimosis and what are the treatments?

What’s interesting is that Paraphimosis is usually the result of a GP or healthcare provider failing to handle the foreskin properly.

Dr. Vickers says: “Paraphimosis is common in a healthcare setting where a doctor or nurse may inadvertently forget to return the foreskin to its normal position.”

A physical examination and the placement of a catheter are the common culprits.

Physical injuries can also lead to Paraphimosis, but once again, this is extremely rare.

Before seeking professional help for Phimosis, there are a few simple things you can try at home.

“Applying ice can reduce any swelling and lubricant can be used to return the foreskin to its normal position,” says Dr. Vickers.

“If the pain, swelling, or numbness worsens, or if these methods are not successful, a trip to the emergency department is a good idea.”

A surgeon may have to cut the foreskin, or you could be looking at an emergency circumcision. Either way, these are far better outcomes than dealing with gangrene.

If you’re experiencing the symptoms of either condition, chatting with a GP is your best course of action.

And remember, good hygiene is one of the most important factors when it comes to reducing the risks of foreskin fallout, or penis problems in general.

Because cleanliness is next to godliness, or so they say. 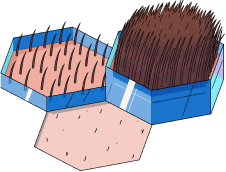 Missing out on sex is not your only option.
6
min read
Living Better
,

What does “average dick” even mean?

How to check for testicular cancer

While rare overall, testicular cancer is the most common type of cancer in males aged between 15 and 34.
4
min read