In this guide, we look at what to do when unemployment hits, and ways to turn a bad moment into an opportunity in amazing the internet age.

Written by
Team Pilot
Medically reviewed by
Last updated
May 30, 2022

A Punch In The Face

Losing your job can be a shock; unemployment an uphill battle. But you aren’t the first to face it (or last). And sure! Maybe it’s cause of something you did or didn’t do. But it’s not always your fault – the economy goes in cycles, and all industries have up and down swings.

It happens to the best of us

Walt Disney and Steve Jobs got fired from their own companies. Jack Dorsey of Twitter and J.K. Rowling did their best work during a stretch of unemployment.

Companies go under and restructures can render positions redundant; or maybe you’re just an unlucky grad. The main thing is apocalypse isn’t upon us... yet.

It's business (and not personal)

Anything in business isn't personal (as much as it feels like it is.)

Even if your direct actions caused your new-found freedom, it was done in a business environment and that is worth remembering. You can learn from it, and begin to move on.

Unemployment spikes heavily during the down of economic cycles, and if you look in to each industry, none are exempt from their own swings and roundabouts. This bird's eye view of how the economy works will come in handy - it'll remind you that it's not always strictly your fault, and sometimes forces bigger than ourselves are at play.

Now you've got the time, buy a book on economics and read it. You'll at the very least understand how business thinks and operates in the wider context of society.

But why does it feel so bad?

Author and philosopher Alain de Botton suggests in his famous TED Talk that people think they can do anything if they work hard these days.

We all have dreams of climbing to that lofty title; manager, CEO, ruler of the Seven Kingdoms, etc. Of course, these titles usually come with more money and better perks (and the odd boozy lunch).

It's the loss of your dream title and that progression that hurts the most (and more than the paycheque, because as you'll soon realise, you can get that anywhere).

Also, you may see yourself as the good old fashioned family ‘breadwinner’ and now you don’t know how you’ll get food on the table, and it can feel emasculating.

Remember again, this is how (almost) everyone feels.

It’s understandable you’re down in the dumps. If you’ve been looking for work a while, then it’s also common to feel you have no control over the situation. You might also be feeling:

It's useful to think about the 'worst case scenario' in any situation that feels really bad (but isn't actually as bad as your brain wants you to think).

For example, if you lose your job and the 'worst case' is that you'll have to get a job at a pub pulling beers or waiting tables at a cafe 12 hours a day, then so be it.

You'll be able to scrape by, put food on the table until a job comes up or the economy picks back up. Nothing is permanent. You can sleep on the floor at mum's place or camp in a mate's yard until this passes.

And anyway, what doesn't kill you will make you stronger.

You're not going backwards, you're going sideways, and for a moment.

In the way a good running back in the NFL holds his run until a new gap opens up, you're just biding your time, waiting to seize an opportunity. It pays to pick the right one. You have the time; don't rush toward the first door that opens.

Life Without A Pay Cheque

This can be really disorienting. No alarms, no shirts to iron, no friendly barista and you'll even start to miss emails flooding your inbox. You'll feel directionless. This can feel disheartening, but it's also perfectly normal.

You’ll notice that getting another job doesn’t happen overnight. You might be losing sleep thinking “what do I do next” or maybe you’ve lost your appetite out of boredom or guilt.

Alternatively, you’ve just eaten your way through your local Woolworths’ Dorito stock and you're out of two-minute noodles.

Be aware of moodiness

You may also have a quick trigger at the moment.

You’re getting bothered by the little things. Actually, one study found that men were less ‘agreeable’ (being friendly and polite) after one to four years of unemployment.

Unfortunately for everyone else, you probably don’t feel like joining the boys at the pub (or seeing anyone) right now.

And unfortunately for you, you may have lost that precious libido.

Saying ‘be optimistic’ is meaningless. How does anyone just become optimistic? Clicking your fingers won’t fix anything.

On the other hand, recapping what shoulda-woulda-coulda is only going to keep you unemployed. It’s happened. So what next?

Reward yourself with some R&R

You may already be enjoying ‘funemployment’.

Crashing on the couch, sinking a few midday brews after a long-winded Reddit troll? That’s fine! You should enjoy your time off while it lasts. It’s a novelty not being chained to a desk or job site for a change.

Pick your fitness up again

Once you’ve got Netflix neck, it’s time to open the windows and get outside.

Go for a run, clean the gutters at your parents house (and get them off your back), build that cubby house for the kids or head to the beach, see your nephews and nieces.

Get those endorphins flowing and start feeling on top of your game again.

You’ll feel more confident in what your options are once you know what you’ve got to work with. You’ll probably be spending more in unemployment; doing ‘things’ to distract yourself and ordering take out.

But check your incomings and outgoings. You might need to bite the bullet and pull up stumps on the luxuries for the minute (and put that credit card back in the wallet!).

This might just put the fire under your bum to get moving on job apps.

The internet has changed the world, and it's time to be aware of trends and how easy it is to take on new careers, without uni degrees or experience.

Is it time to learn to code? Maybe you move into a slightly new role within your field?

Hit up one of the many online learning platforms, like Udemy. Enrol in a short course, or read up on what else you can do with the experience you have. Other alternatives are Skillshare and Coursera.

If you're fresh out of uni or an old head in the game, the Happen to Your Career Podcast is a great place to hunt down a your career fit (and how to go about it). Who knows? You could check out a truckload of new options to find that you really enjoy what you did. But at least you know, and you can focus on finding work that you really want to do.

Talk to people in your network

Now, it might be uncomfortable but chatting to your friends will make you feel better! But aside from the distraction, your mates might actually know of other work around the joint. If they know that you’re on the hunt they can keep their ear to the ground for you.

Also, finding a job on seek.com is like looking for a needle in a haystack. Word-of-mouth is where it’s at. So keep your feelers out there and talk to people. Stay up to date and connected on your networks (e.g. LinkedIn). Get in on industry nights as your mates’ +1 and see what’s new.

Depending on where you live, you may also be able to hit up local networking groups run by your council. Do a quick Google for "[Your Council/Shire] Business Network."

We know that you’re likely to feel down (and as a result, you stop seeing their mates) while unemployed. But a Gallup survey in the US discovered that feeling that way can mean it’s harder to land another job!

Remember, that on the end of every single job ad is a real HR person who wants someone great for the role. It doesn't matter if its stacking boxes or running the company, put the effort into each application and you will be rewarded.

Not researching the company

It pays big-time to learn about the company and its people you're interested in. Seemingly useless information, such as where the office is and who started the company will actually come in handy, and if you can drop knowledge into your cover letters and emails, it'll stand out like the proverbials.

Because every job and company is slightly different, show you actually give a shit by writing custom cover-letters and show you are actually human. Don't be too formal either; it reeks of being a robot who is only in it for the paycheque. Draw attention to your relevant experience, and be enthusiastic about your potential future at that particular company.

One study found 174 of 500 Fortune companies used Twitter to recruit! So employers hunt you down before bringing you in for a face-to-face. So clean up your online act!

If you can get a website together while you're unemployed, that's the best possible result and will put you head-and-shoulders above the rest. Wix or Squarespace are excellent places to start.

Still Feel Down in the Dumps?

If you've been unemployed for a while and feeling helpless, low, or lacking bravado, it pays to get out of your own head and talk to someone who can lift you back up.

They will help to work out what it is you’re worried about and what’s stopping you from taking the leap back into work.

Talk to our mental health partner TIACS for a free, completely-online, confidential chat.

There’s no doubt this feels like a huge ask when you’re recently unemployed, and more so if you’ve been unemployed for a while. Besides, you never asked for this!

But if you get organised, stay motivated, stay fit, you’ll be ready to strike when a great opportunity comes your way. It's only a matter of time.

Get your head in the game
Start consult 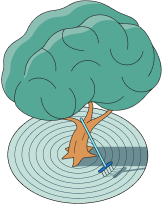 An overview of some of the tools and tactics you can use to bring order to your chaotic life, and get back on top of your mental health.
12
min read
Guides
,
Mental Health

We look at why men are increasingly turning to mindful techniques to give themselves an edge.
12
min read
Guides
,
Mental Health

Find out whether the costs on your time are worth the benefits of social media use.
8
min read
Living Better
,
Mental Health

How to talk to your boss about your mental health

There's always a way to get what you need when it comes to putting your mental health first.
7
min read